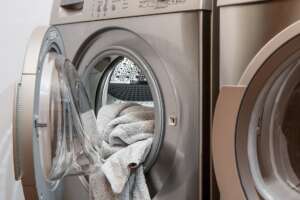 In the history of technologies, washing machines are one of the most relevant innovations in terms of their social impact and, paradoxically, one of the most misrepresented segments. The unreliability of the patents system at the time led to an absence of factual substance regarding the evolution of an appliance that played such a significant role in the empowerment of women as well as the improvement of sanitary conditions. While many labor-saving technologies have progressively decreased employment rates, the automation of washing machines has boosted economies in many parts of the world and opened the doors to laundry service Sudz and many other businesses to assist people through their busy lifestyles. This article will take you for a spin around the evolution of washing machines, from wooden machines all the way to the high-performing machines you find at our laundromat Sterling Heights, MI.

Nowadays, you can visit our laundromat Sterling Heights, MI for easy and efficient laundry service Sudz with eco-friendly products and high capacity machines. However, until the late 18th century washing clothes consumed excessive amounts of water, demanded heavy physical labor, harmed the skin with caustic substances and required large investments of time. Hand-powered mechanization imitating the motion of washing with a scrubbing board inspired hand-cranked rotating drums with levers or handles in the mid-19th century to expedite the arduous laundering process. Yet most families in the early 20th century were still using basic wringers and washboards to do their laundry at home.

The advantages of a clean society

Public wash-houses, the 19th century ancestors of today’s laundromat Sterling Heights, MI, were introduced as part of a major sanitary reform in times when cholera, typhoid fever and smallpox were serious concerns. Their impact over the public health and hygiene of the community was as positive as their influence towards the improvement of the laborious laundry methods. Hand washing clothes by the river was slowly replaced by the convenience and salubrity of washing, drying and ironing clothes in these growingly popular wash-houses. For a small fee, a person could have access to soap, water, heat, light and, above all, a practical mechanical washer and a centrifugal water extractor. As running water was introduced into homes, these public laundry facilities gradually disappeared. However, they inspired the earliest prototypes of the washing machines you find today at our laundry service Sudz.

As the first step towards electric washing machines, small motors were sold separately to be connected to the hand cranks on washing machines in the 1880s. As long as the unit was powered by a rotary motion, you could hook the electric motor and follow the manufacturer’s instructions to electrify your wooden washing machine. Later on, some washing machines with incorporated electric motors were manufactured by companies such as The Whirlpool Corporation to power the agitation system and the wringer used for pressing water. These early electric machines were not automatic; the operator still had to manually fill and empty the tub, and monitor timings. Hurley Machine Company and the 1900 Washer Company were the pioneers in large scale manufacturing of electric washing machines. Wooden tanks were replaced with metal ones in models such as Thor, designed by Alva J. Fisher, which is among the first patented machines for commercial laundry.

Three decades later, as electricity became more accessible, domestic washing machines were launched by Bendix Home Appliances. These needed to be fixed to the floor in order to stop them from dancing around the room as they had no drum suspension. This company was the first one to introduce semi-automatic washing machines in 1937. It was a significant milestone in the reduction of human efforts in the laundry process. This machine was able to autofill, regulate the water supply, maintain the water temperature through a thermostat, rinse and spin-dry the clothes. Everything was controlled by a timer. The high production costs and World War II put a hold on the demand of these artifacts, but companies such as General Electric, who launched one of the first front loaders, got rapidly back on track once the economy was restored around the 50s. By this time, machines were becoming fully automatic and the connections to cold and hot water supplies went from temporary slip-on to permanent connectors.

As the popularity of washing machines grew, manufacturers continued seeking for ways to make the laundry process easier. Reducing the size and improving the efficiency of washing machines were focal points in their continuous evolution. In the 90s, washing machines became digital for further automation applied to the selection of cycles, reaching higher user acceptance by caring for delicate fibers. Today, washing machines are a fundamental support to the busy lives of contemporary people. Smart technologies incorporated to optimize the functions and protect the environment are among the ongoing advances.

At Sudz Laundromat, we strive to deliver the best experience to everyone visiting our laundromat Sterling Heights, MI. From commercial to personal laundry, we save you time and money with our top-grade laundry services. At a small fee, our contemporary version of the old school popular wash-house offers affordable fabric softener, detergent, bleach and soap, as well as free coffee, Wi-Fi, flat screen TV’s, books and magazines to enjoy in a comfortable atmosphere. Visit us at our laundromat near shelby township, MI, to enjoy the advantages of modern washing machines.